How to Avoid Climate Disaster 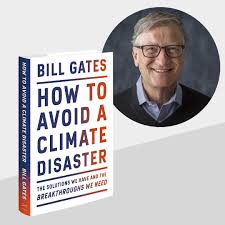 In this urgent, authoritative book, Bill Gates sets out a wide-ranging, practical—and accessible—plan for how the world can get to zero greenhouse gas emissions in time to avoid a climate catastrophe. Bill Gates has spent a decade investigating the causes and effects of climate change.

Sustainable energy - without the hot air The author, David JC MacKay, is Professor in the Department of Physics at Cambridge University and was recently appointed Chief Scientific Advisor to the UK Department of Energy and Climate Change responsible for the Low Carbon Transition Plan.

The book is great reading for anyone interested in energy and sustainable development. MacKay believes that the UK and Europe in general can’t count solely on renewables. He shows that wind, biofuels, hydro, solar PV and other energy sources don’t add up enough energy to answer our current needs...

New book about nuclear energy:   What happens when something happens Two EAFES executive board members, Michael Gerstmayr and Eileen Radde, are together with Prof. Helmut Böck authors of a new book. The book offers an expert overview of current dilemmas in Nuclear energy. In A Short History of Nearly Everything, beloved author Bill Bryson confronts his greatest challenge yet: to understand—and, if possible, answer—the oldest, biggest questions we have posed about the universe and ourselves. Taking as his territory everything from the Big Bang to the rise of civilization, Bryson seeks to understand how we got from there being nothing at all to there being us. The result is a sometimes profound, sometimes funny, and always supremely clear and entertaining adventure in the realms of human knowledge, as only Bill Bryson can render it.

Worth to read: Beyond the limits Beyond the Limits Confronting Global Collapse, Envisioning a Sustainable Future is the path-breaking sequel to The Limits to Growth, the international best-seller which sold 9 million copies in 29 languages when it was published 20 years ago. At that time the authors concluded that if the present trends of growth continued unchanged, the limits to physical growth on the planet would be reached in the next 100 years. Now, in Beyond the Limits, the authors show that the world has already overshot some of its limits, and if present trends remain unchanged, we face the virtually certain prospect of a global economic collapse in the next century. That collapse is far from inevitable, however. Now three of the original authors of The Limits to Growth, Donella Meadows, Dennis Meadows, and Jorgen Randers have written Beyond the Limits to help us confront the possibility of global collapse in order to envision the possibility of a sustainable future. They use World3, their system dynamics computer model, as a unique tool to see far into the next century. And by varying the basic global policy assumptions that go into the model, they are able to show a range of outcomes, from collapse to sustainability. Beyond the Limits comes to the following key conclusions. Human use of essential resources and generation of pollutants has surpassed sustainable rates. Unless there are significant reductions in material and energy flows, the world faces an uncontrolled decline in per capita food output, energy use, and industrial production. In order to avoid this decline, growth in material consumption and population must be eased down at the same time as there is a rapid and drastic increase in the efficiencyof materials and energy use. A sustainable society is technically and economically feasible. The transition to a sustainable society must be made by carefully balancing our long and short-term goals and emphasizing equity and quality of life. It will require honesty, compassion